Its time to go Hulk out on some enemies! Ahead of Marvel’s Avengers releasing this September, Fortnite players can now unlock the incredible Hulk Smashers Pickaxe and bonus Hulkbuster style. 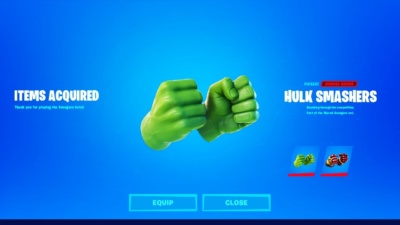 To be able to wield these hands, you need to first finish the three HARM challenges for the Avengers Open Beta. Available on Xbox One, PlayStation 4 and PC starting next week, below is the full beta schedule:

In addition to completing the challenges, make sure your Epic games and Square Enix accounts are linked properly.

The final day for the Beta is the 23rd so get out there and Hulk Smash the competition!