In less than 2 weeks it will be the 19th year anniversary of the critically acclaimed RPG, Final Fantasy X. The game stars Tidus, a Blitzball player who’s life is thrown asunder when Sin destroys his home town of Zanarkand. On his journey to defeat Sin, Tidus joins summoner Yuna on her pilgrimage, but there are more that make up their crew. 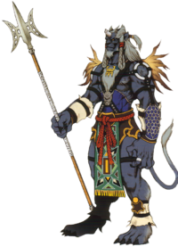 At number 7, we have Kimahri, a quiet Ronso warrior that takes his job as protecting Yuna very seriously. The lance he wields can do pretty moderate damage, and his lancet ability which allows him to copy enemy abilities is very useful. I didn’t get very attached to him.

Number 6 is the powerhouse Auron! Along with being strong, and mysterious as hell, he’s got some cool moves up his sleeve. He’s reserved and quiet but a pretty nice guy, and he’s a definite must on your team if you want those high damage one off hits.

Number 5 is The Black Mage, Lulu. Her arsenal of spells can be the key to turning any battle around. She’s got a fiery personality, a short temper for fools, and doesn’t like to joke around when it’s time to get a mission done. She’s got a sweet side but usually only likes to show it for Wakka and Yuna.

At number 4, we have Wakka, the head of the Blitzball team, The Besaid Aurochs! He can pack a punch with his elemental overdrive and is your go-to for sky enemies. He may be a little stuck in his ways when it comes to how to do things, but he is the sweetest guy through and through.

For number 3, we have the young alchemist herself, Rikku. A teenage Al-Bhed girl, her thief abilities and mix overdrive are pretty fun to play around with to see what you can steal from enemies and create in order to take them down! She really brings some fun and pep to the group with her upbeat personality and playful teasing.

Number 2, summoner Yuna, with amazing strength and power, the aeons that she can bring forth in battle are not only incredible to see but do powerful damage, and her overdrive can bring her aeons in to battle full power! Yuna is not only great at her job, but is a wonderful presence on the team and has much love for her guardians.

Last but certainly not least we got the main man himself, Tidus! A young man taken from his home, wielding the sword Brotherhood, he not only has epic overdrives that showcase his Blitzball moves, and incredible abilities, his immense strength can make him the core of winning any battle. He’s calm, cool, collected and a certified bad ass.

Final Fantasy X/X-2 HD Remaster is the perfect first Final Fantasy to start your journey into the series & is now available on Xbox One, Nintendo Switch, PS4, PS3, and PS VITA

Neo: The World Ends with You Release Date Confirmed

My list would look a little different (Wakka and Tidus way lower, Yuna #1), but nice article.