E3 has always been an exciting showcase of the latest developments behind video games and their respective companies, giving us an incredible view of just what to expect in the following months. This year has been no different, and Microsoft and Bethesda delivered with immense confidence, a spectacular showcase of games for us to water our mouths over. Here are a few highlights from the conferences:

Straight out of the gate, Microsoft showed the brand new Halo Infinite, which will be developed using the Slipspace Engine, a brand new game engine that is sure to bring big things to an already big series. Halo has long been among the most popular titles that Microsoft had to offer, alongside Gears of War, of which the fifth title in the main series was also announced. So it’s certainly no surprise that with an entirely new engine, big, amazing things are expected from this title.

Among the two major league releases, an old series was also brought back to light this year with the announcement of Devil May Cry 5. A long running series about annihilating demons, and of course, chilling with a bunch of hot chicks, Devil May Cry has been awaiting a main series release for ten years(five if you include the DMC release in 2013) and it looks to be back with a vengeance. Nero seems to be taking center stage once again, along with a brand new companion, and of course, everyone’s favorite devil hunter, Dante, makes a split second appearance at the end of the trailer. What exactly can we expect from the fifth title in the main series? Nobody knows for sure, but you can bet that it will be styling!

Other titles of interest include the Skateboarding experience of Session, the next entry in the Tom Clancy series with the Division 2, the crossover battle extravaganza Jump Force, and the unique entry known as Cyberpunk 2077(by familiar face CD Projekt, creator of the Witcher series). Microsoft came out with a bang and may very well have taken the crown alongside Bethesda at this year’s E3.

Speaking of Bethesda, the company known for some of the most brilliant titles on the market laid the foundation for breathtaking future stories, including a unique mobile Elder Scrolls experience, and the announcement of the Elder Scrolls 6. Among the twelve announcements at the conference, one stood high and proud above all the others.

Fallout 76 is a prequel to the acclaimed Fallout series as a whole, and comes with breathtaking visuals, and even more unique gameplay mechanics than its predecessors. Including the ability to nuke your friends into submission, Fallout 76 brings a whole new entertainment aspect to multiplayer gameplay. Where one moment you and some friends could be fighting a mob of enemies together, the next you could be blasting each other’s faces off to impede their progress, or even just for the fun of it. The game is sure to leave players dying(literally and figuratively) for more.

Along with Fallout 76, Fallout Shelter was also announced to be fully moving to console. It will be available for free, now on Ps4 and Nintendo Switch.

With Microsoft and Bethesda’s conferences behind us, as well as Sony, Square Enix, and Nintendo which will be covered in another article, it’s pretty safe to say that gamers have nothing to worry about quenching their insatiable appetites.

Nothing much to say really... Kingdom Hearts, fanfiction etc...

1 Comment on "Bethesda and Microsoft Bring the Heat E3 2018"

That Halo wallpaper looks fantastic! So will the game, although I am still confused about fallout 76 to be honest!! 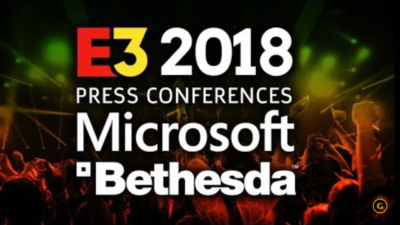